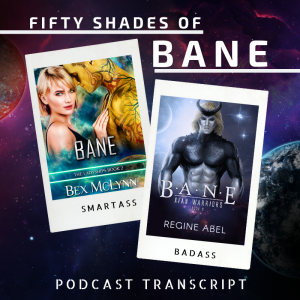 Bane: We said we wouldn’t use that title.

Therion: I thought you were kidding.

Bane: Do I look like a kid to you? I’ve told you this many times. I tire of it.

Bane: I have horns. I don’t have a tail. Neither do you.

Bane: No. That would be an inglorious battle unworthy of me.

Therion: Is that an insult? It sounds like an insult.

Bane: If you find the truth insulting… (shrugs)

Therion: Whatever. The POINT is that two awesome books are coming. Bane releases on September 24th followed by Bane on October 4th.

Bane: That information was useless.

Therion: What? I gave titles and dates and everything.

Bane: You did not make clear WHICH Bane.

Bane: Stop right there. You don’t even come close to kicking ass.

Bane: We spoke of this many times. Again. You’re trying my patience. Must I remind you with another session of ass kicking?

Therion: You know, you get blirsty.

Therion: And we’re back. Some of us have new bruises.

Therion: And that’s what makes podcasts so much fun! You only have to imagine the hot, blusty action–

Bane: Don’t you have more things to say?

Therion: Yeah. I know. I wrote them.

Bane: So then speak them.

Bane: You were never on script.

Bane: My female is beyond kickass.

Therion: And my book, called Bane, is about a smartass asshole doing dumbass things with a sweet ass girl who is far too good for him. Releasing October 4th.

Bane: That was incredibly accurate.

Bane: Because I am. Dragons do not lie.

Therion: Well, that’s adorable. Because I had a marvelous time with y–

Currently lost in a good book…