He wanted to take without giving, and she accepted his offer. 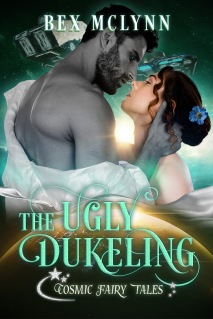 No one ruffled Cisnetta Fowler’s feathers like MajorAtratesGeswin, the infamous Ugly Dukeling. Her first glimpse of the handsome alien hybrid had her dismissing his crass moniker, until his abrasive attitude proved the gossip to be true. He was an arse, but an arse that she both needed and wanted. Thankfully, Cisnetta was one tough bird who never turned-tail and ran.

Major Atrates Geswin, second-in-line to the Andrake dukedom, found himself locked in a skirmish with an astounding woman. Cisnetta Fowler handled his insults as if he passed her fluffy ducklings. But rather than softening him, she inflamed his Otar-alien side, spurring him to seize, to demand, to want… All that stood between his victorious claiming of her was a vicious, pet swan with a neck-wringing fetish.

As far as Atrates was concerned, Cisnetta was his for the taking.

This story is a science fiction alien romance retelling of The Ugly Duckling. It is intended for mature readers.

Cosmic Fairy Tales
The Ugly Dukeling is part of the Cosmic Fairy Tales collection, a collaboration of authors retelling beloved tales with a science fiction romance twist. Each book is a standalone, containing its own Happily Ever After, and they can be read in any order. Be sure to explore the other titles in the collection:

Currently lost in a good book…